The small municipality Tazacorte with some 5.000 inhabitants is situated at the exit of the Caldera de Taburiente and is devided into two parts, Puerto de Tazacorte and El Pueblo. The village combines architectural variety, agriculture, fishing and tourism on only 12 KM².

The Ermita de San Miguel Arcángel (hermitage) from the 15th century or the mansions from the 16th century like for example the Caserón del Almirante Díaz Pimienta are true eye catchers in Tazacorte. Also the ancient traditional houses in the historical center give the village the typical canarian style.

In the lower part of Tazacorte there is the sport and fishing port as well as the longest sand beach of La Palma with lots of leisure time activities, restaurants and shops. However Tazacorte is not overcrowded by tourists! Only in summer months when spanish and foreign tourists come together the beach gets crowded sometimes. But even then it is not comparable with other spanish bathing resorts.

There is not only this beach in „Tazacorte Puerto“ also there is the gravel beach in La Bombilla, the sand beach Los Guirres, El Roque or El Charcón are recommendable and not touristic.

Tazacorte Puerto has some superlatives: Besides the longest sand beach of the island (about 2 kilometers) there are also the most hours of sunshine, the only official nudist beach and the only beach where it is possible to bath safely the whole year long.

On the day of the holy Michael, the 29. September 1492, the spanish conquerer Alonso Fernández de Lugo started the invasion from Tazacorte as it is easy accessible. The king Tazo of the Guanches offered fiercely resistance in his district Corte del Rey Tazo on which the village got the name Tazacorte. The patron is San Miguel de La Palma, the saint archangel like on the whole island.

Then life in Tazacorte was characterised by the conquerers, pirates and the big landowners what created a feudalistic structure. Nowadays the small municipality in the sunny west of the island La Palma is a contemplative place with the typical canarian serenity and especially lots of sun. 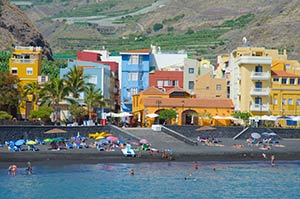 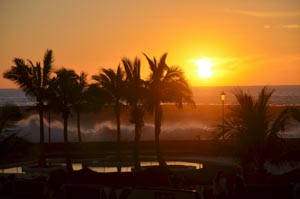